School Sports Sites: About The Author

Derek Miller has been creating websites since he took his first web design class in high school in 1998. After high school, he earned his degree in Computer Science and Statistics from the University of Illinois in Champaign while designing personal websites and a few freelance projects. After graduating from the University of Illinois, Derek earned his Masters and secondary teaching certification from Aurora University. He started teaching computer courses at Yorkville High School while developing the school's entire computer curriculum and serving as the district web master for a few years. He currently teaches computer courses at Naperville Central High School in Illinois. He started coaching cross country at Yorkville Middle School in 2008, which led to the creation of School Sports Sites. 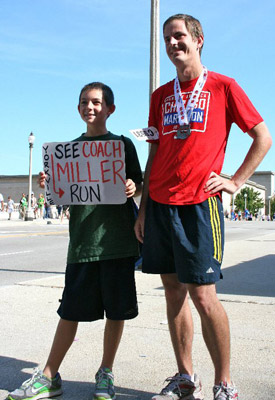 Derek earned his teaching certification from Aurora University in 2005 and started teaching computer courses at Yorkville High School the same year. He comes from a family of teachers with two parents who teach high school along with a number of siblings who teach. His career at Yorkville first saw him teaching Computer Concepts, Web Design, and Visual Basic, but he grew the computer department by adding a more advanced Web Design course as well as AP Computer Science, and changing the Visual Basic course to use the C# programming language and allow students to develop Xbox games. He is constantly learning new technologies, especially those that relate to web development. He was the district webmaster in Yorkville and redesigned the entire district website at y115.org. In 2020, Derek earned his doctorate in Curriculum and Instruction from Northern Illinois University.

In 2008 Yorkville wanted to expand their cross country program by creating a middle school team. Derek was tapped as the head coach and has worked hard since then to create a great feeder program for the high school team. The team joined the IESA State Series in 2009, and both the boys and the girls teams made it to State for the first time in 2010. The team's best finish was 10th place by the girls in 2011. Derek created a web site for the team, which sparked his creativity and led to School Sports Sites. His experience in cross country is the reason cross country was the first sport to be implemented by School Sports Sites. Derek took a year off from cross country when he moved to Naperville Central High School in 2019, but started coaching again with Naperville Central's girls cross country team in 2020.

If you have any questions for Derek about School Sports Sites you can email him at derek@sportssites.us.